Special Offer : 10% DISCOUNT on published price, in case tour is booked & paid for 90 days prior to tour arrival date subject to minimum 2 persons travelling together.

Classical India Tour is one of the most sought after programs for any tourist visiting India. Classical India tour lets you catch a glimpse of immensely beautiful destinations of north India. Be it the beautiful architectural city of Jaipur built of Red sandstone or one of the wonders of the world - the Taj Mahal either the visit to the temple of Kamasutra - Khajuraho or the boat ride on the Ganges river in the ancient city of Varanasi when the dawn hovers, name one beautifully exotic and spectacular destination, and north India never fails to surprise you with what it has store in for you. Spread over the span of eight days this tour lets you surrender in the tranquility of north India. Pack your bags and this tour would be the most cherished travel experience.10% DISCOUNT on published price, in case tour is booked & paid for 90 days prior to tour arrival date subject to minimum 2 persons travelling together.Breakfast on day of arrival
Meals where not mentioned
Medical & personal expenses like beverages
Tips and gratitude’s, telecommunication charges
Wi-Fi service
Laundry and what so ever not mentioned under “cost Includes1-1031-3 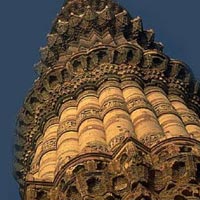 Arrive Delhi at Terminal 3 of Indira Gandhi International Airport. You are greeted and escorted by our company representative to your Hotel by your personal chauffeur. Overnight stay - (Check -in 1400 hrs).
Day 2: 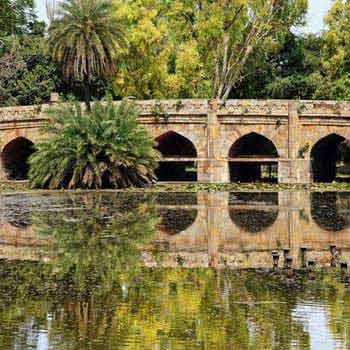 Delhi: Morning enjoy a luxurious & relaxed breakfast. Later at 1000 hrs proceed for guided tour of Old Delhi. Begin your tour visiting the Lotus Temple. Next proceed towards Old Town to explore the magnificent Red Fort, built at the zenith of the Mughal Empire in India. The centuries- old international market- place that sprawls at its feet is still one of Delhi’s most important commercial hubs: Chandni Chowk, or as also known as the “Moonlight Square”. Walk through the bustling silver market and the wholesale spice market. The sounds, smells and colors of the bazaar, and the throngs of people who animate it make this an unforgettable spectacle. Visit Jumma Masjid, the largest mosque in Asia and Raj Ghat - Final resting place of Mahatma Gandhi, before returning to hotel for Overnight stay in the hotel.
Meals : Breakfast
Day 3:

Delhi to Jaipur - Morning after breakfast, depart by surface for the City of Jaipur - an exuberance of colors, dance & song with traditional arts and crafts. Known, as the 'Pink City', it is one of India's most well planned cities with wide straight avenues, roads, streets and lanes in a grid system. A 6 hour’s drive gets us to this land of Maharaja's, forts & Palaces. Later on arrival at your Hotel, you will be met by our company representative who will facilitate your check in at the hotel.

Afternoon 1500 hrs is reserved for guided sightseeing tour of the City Palace situated in the heart of the old City, The City Palace SMS Museum and Jai Singh's observatory also called “Jantar Mantar” built in the18th century by Maharaja Sawai Jai Singh II, where huge Masonry instruments were used to study the movement of constellations and Stars in the sky. Drive past Hawa Mahal (Palace of winds) built in 1799, by Maharaja Sawai Pratap Singh, is the most recognizable monument of Jaipur. Stop here for photos. Return to your hotel for Overnight stay in hotel.
Meals : Breakfast
Day 4: 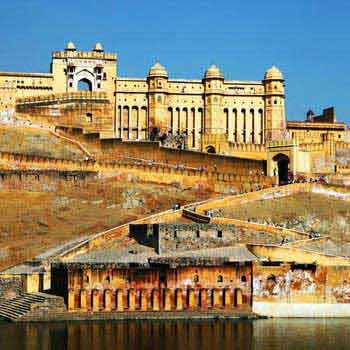 Japur Morning after breakfast, proceed for Half Day guided excursion to see two of the most impressive forts of Rajasthan. Visit the impressive Amber Fort the former capital of the Royal Family of Jaipur. On arrival mount an elephant to ride to the main entrance of the fort located on a hilly mountain top. Next visit Jaigarh Fort. Jaigarh built in 1726, has the world’s largest cannon on wheels, while Nahargarh built in 1734 provides a panoramic view of the Jaipur city. Return to hotel (Those who do not want to ride an elephant can walk up to the fort) - (2 persons per elephant) In case Elephants are not available Jeeps will be used. 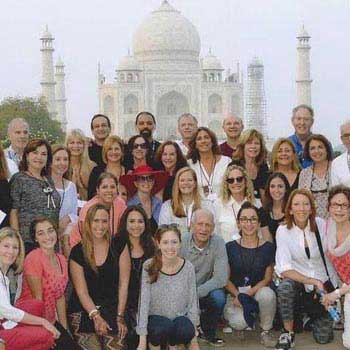 Jaipur -Fatehpur Sikri -Agra: Morning after breakfast, depart by surface(5 hours) for the Mughal splendor of Agra, en-route stopping to visit Fatehpur Sikri, the ghost city lying 35 km from Agra. Fatehpur Sikri built in red sandstone in honor of Saint Salim Chisti, who foretold the birth of 3 sons to Emperor Akbar, is an example of robust stability combined with originality. Each important edifice here represents a type by itself. Notable among them is the Diwan- e- Khas, Punch Mahal, the Tomb of Salim Chisti, and the Buland Darwaza. Later drive on to Agra and check-in to your hotel.

Late afternoon is reserved for a visit the incomparable Taj Mahal. Situated on the banks of river Yamuna, the monumental beauty has inspired countless people around the world and is a fine example of fusion of many architectural styles. It is one of the wonders of the modern world. Built in the year 1652 by Emperor Shah Jahan to immortalize the memory of his beloved wife Mumtaz Mahal, who died tragically in 1631. It took 22 years and 20,000 skilled artisans to complete this poem in white marble. Proceed on Tongas (horse driven chariots) to this magnificent monument of love to Witness sunset before returning to your hotel for overnight stay.
Meals : Breakfast
Day 6:

Early morning transfer to Agra Railway Station to board superfast Shatabdi Express at 0802 hrs for Jhansi. Breakfast will be served on board the train. Later on arrival at 10.44hrs, you are greeted and escorted by our Jhansi associate’s representative to your waiting vehicle to begin your journey to the City of Orchha in the Tikamgarh district of Madhya Pradesh. A 40 minutes’ drive brings us to this historically important city.

On arrival proceed for a guided sightseeing tour of the medieval city and erstwhile capital city of the redoubtable Bundela kings. Bordered by the beautiful Betwa River, Orchha reflects the sumptuousness & magnificence of the mighty Bundelas. With its striking forts, regal palaces, poetry carved temples and chhatris; Orchha presents a matchless spectacle and is a delightful place for photographers. Orchha is renowned for its world class Mural Paintings.

Complete sightseeing and proceed for lunch at Amar Mahal. The Old palace, which still stands high depicting the tales of bygone era, was once witness to the grand royal stories. Enjoy your Lunch with a panoramic view of the monuments, surrounding hills and wildlife sanctuary.

After lunch proceed by surface for Khajuraho – also called the “land of the moon god” is located at a distance of 172 Kms and is a 3.5 hrs drive. The temples of Khajuraho were built sometime between 950 to 1050 A.D. during the Rajput Chandela dynasty of Central India (These rulers claimed descent -from the moon, hence the name Chandela). Khajuraho is a UNESCO World Heritage Site and is known for its enormous, intricately sculptured temples adorned by vignettes of passion, eroticism, dance, music and creative pursuits. Later on arrival, transfer to your hotel. Balance day is at leisure. Overnight stay.
Meals : Breakfast, Lunch
Day 7:

Morning after Breakfast proceed for Half Day guided sightseeing tour of the Western Group of Temples, containing the magnificent Shaivite temple Kandariya Mahadeva. Khajuraho’s art is a manifestation of the essence of the philosophy of Indian aesthetics. The erotic sculptures depicting Kama Sutra are unique in the world. They cannot be passed off as just erotic sculptures; the temples have some of the most revered Gods of Hinduism. Some of the other famous temples you will see in the complex are the Lakshmana & the Vishwanath Temple.
Return to your hotel. Later on time, transfer to Khajuraho Airport to board the afternoon flight to Varanasi. Later on arrival you are greeted and escorted by our Varanasi associate’s representative to your waiting vehicle for transfer to Varanasi town
En-route to the hotel, we take a slight detour to visit the ancient city of Sarnath where Buddhism first made its appearance nearly 2500 years ago and where Lord Buddha gave his first sermon to his 5 disciples. Also visit the museum before continuing your journey to Varanasi hotel. On arrival complete check in formalities.
Evening ride on cycle rickshaws’ to the Ghats to witness Aarti (Pooja) ceremony performed at the Ghats, of the Ganges River. Return to your hotel for Overnight stay.
Meals : Breakfast
Day 8: 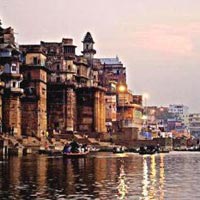 Early morning before sunrise, transfer to the Ghats to take an unforgettable boat ride on the Ganges. Since time immemorial, millions of pilgrims arrive every year in Banaras, in search of salvation in the waters of the holy river Ganges. At the crack of dawn, they become a thousand spots of color bathed in the golden waters of the Ganges. The scene on the bathing Ghats is quite fascinating to the western eye. Yogis meditate in impossible positions. Brahmins sit under mushroom-like umbrellas, to bless everyone for a fee. Men and women in various stages of wetness reverently launch little oil-lamps on to the water. Bursts of religious song mingle with the tolling of temple bells, and the rhythmic beat of washer men pounding the city’s laundry. Cruise past different Ghats built by kings and noblemen and the burning Ghats, and watch sunrise before returning to hotel for Breakfast.

After Breakfast, proceed for Half Day guided sightseeing tour of the Varanasi. This ancient city situated on the banks of river Ganges, in the State of Uttar Pradesh is believed to be more than 2500 years old and is the only city in the world that is still flourishing in its full form. Earlier known as Kashi, which finds mention in the ancient Indian texts of Upanishads and Puranas, Varanasi is believed to have been established by King Kashya in around 1200 BC.

A guided visit takes you to see the Banaras Hindu University campus commonly referred to as BHU; formerly known as Central Hindu College, is a public central university and is one of the largest residential universities in Asia, with over 20,000 students. Visit the Bharat Kala Bhawan- a museum Of international importance. Next we visit the Temples of Bharat Mata, Kashi Vishwanath (Shiva) and Durga Mata. Wander in the narrow by lanes of the old town before returning to your hotel for Lunch. (Please note: foreigners and non -Hindus are not allowed inside Kashi Vishwanath Temple)

Later on time transfer to Varanasi Airport to board a late afternoon or early evening flight to Delhi. On arrival, assistance and transfer to your hotel for overnight stay.
Meals : Breakfast
Day 9: 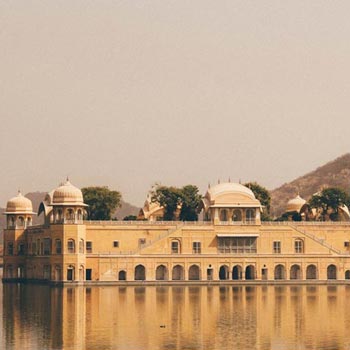 Morning after breakfast, proceed for Half Day guided tour of New Delhi. The buildings designed by Edward Lutyens, architect of modern Delhi - are truly majestic. The Presidential Palace, Parliament House and India Gate are all reminiscent of the British “Raj”. Drive through Delhi’s beautiful tree-lined avenues and the Diplomatic Enclave en route to the 12th century, 234-foot high fluted minaret of Qutab Minar. Your tour will terminate with a visit to Humayun’s Tomb where rests the remains of the second Mughal Emperor to rule India. Return to hotel for Lunch.

Afternoon after lunch, day is free for own activities. This time can be utilized for shopping if you so desires. Overnight stay in the hotel.
Meals : Breakfast
Day 10:

As per clients convenience. Open 365 days a year