This tour has been designed especially for visitors who are on a short visit to India and would like to visit some of the best this country has to offer, and of course, those who Love shopping while holidaying. The 2 major cities of Jaipur and Agra have been featured here. Also known as part of the "Golden Triangle"

Experience the best of India’s historical and architectural highlights on this 4 day private Golden Triangle Tour of Agra and Jaipur with a private guide. Begin your adventure in Jaipur with an Elephant to the gates of Amber Fort in Jaipur, marvel at the 16th and 17th century architecture of the enormous Agra Fort and the Tomb of Itmad-ud-Daulah and gaze in wonder at the exterior and interior grandeur of the Taj Mahal, one of the New7Wonders of the World. Visit the famed Fatehpur Sikri and wander the streets of Delhi & Jaipur, where incredible shopping bargains tempt you to” Shop till you Drop” and don't forget to bargain as half the fun when buying goods in the bazaars is the bargainingNONEBreakfast on day of arrival, Meals, Entrance charges at monuments, any kind of services in Delhi, Medical & Personal expenses like beverages, tips and gratitude’s, telecommunication charges, Wi-Fi charges, laundry, Insurance of any kind, visa, 5% GST and what so ever not mentioned under “cost Includes 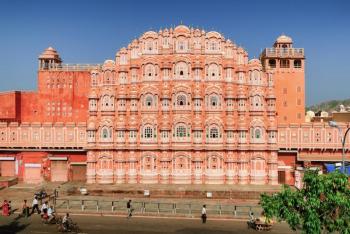 Delhi - Jaipur (263 Km, 5-5 hrs).
Morning, at 0700 hrs you will be met by your driver & car at your Place of Residence to be driven to the City of Jaipur - an exuberance of colors, dance & song with traditional arts and crafts. Known, as the 'Pink City', it is one of India's most well planned cities with wide straight avenues, roads, streets and lanes in a grid system. A 5.5 hours’ drive gets us to this land of Maharaja's, Forts and Palaces with its diversity of colors & culture that is unique to the State of Rajasthan. On arrival, check in to your pre booked hotel.

Afternoon at 1400 hrs is reserved for guided sightseeing tour of the City Palace situated in the heart of the old City, it occupies about one seventh of the old city area. The City Palace SMS Museum displaying a collection of clothes, armory & weapons located within the Palace grounds and Jai Singh's observatory also called “Jantar Mantar” built in the18th century by Maharaja Sawai Jai Singh II, where huge Masonry instruments were used to study the movement of constellations and Stars in the sky.

Drive past Hawa Mahal (Palace of winds) built in 1799, by Maharaja Sawai Pratap Singh, is the most recognizable monument of Jaipur. The 5 storied stunning semi-octagonal monument having 152 windows with over hanging latticed balconies is a fine piece of Rajput architecture. Originally designed for the royal ladies to watch and enjoy the processions and other activities, on the street below. Stop here for photos, before continuing on to Albert Hall Museum, located in the premises of Ram Niwas Garden. Its Indo- Saracenic architecture and stone ornamentation became a source of reference for varied classical Indian styles of design from Mughals to Rajputs. The foundation stone of Albert Hall was laid during the visit of the Prince of Wales, Albert Edward to Jaipur in 1876 and was completed in 1887.
Return to hotel via Johari Bazaar (Gem Market) and the Curio shops. Overnight stay in the hotel.
Day 2: 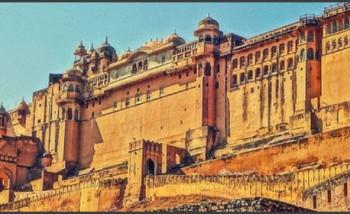 Morning after breakfast, take a guided excursion outside Jaipur town to visit one of the most impressive forts of Rajasthan. The impressive Amber Fort the former capital of the Royal Family of Jaipur, An exotic elephant ride (subject to availability, otherwise Jeeps/car will be used) transports you to the lofty fort, where you’ll experience a tour of this Rajput extravaganza. It is a deserted palace surrounded by majestic ramparts and the magnificent public & private room's evidence the splendor of the rulers of 16th & 17th century Rajasthan.

Day 3: Morning after breakfast, complete check out formalities and depart by surface for the Mughal Splendor of Agra. Enroute stop to visit Fatehpur- Sikri, the ghost city lying 35 km from Agra. Fatehpur Sikri built in red sandstone in honor of Saint Salim Chisti, who foretold the birth of 3 sons to Emperor Akbar, is an example of robust stability combined with originality. Each important edifice here represents a type by itself. Notable among them is the Diwan- e- Khas, Punch Mahal, the Tomb of Salim Chisti, and the Buland Darwaza. Continue your drive to Agra and on arrival transfer to your pre booked hotel. 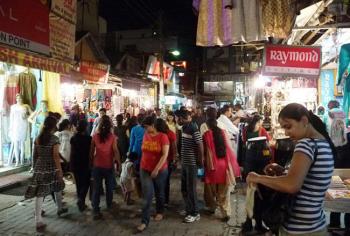 Early morning is reserved for a visit the incomparable Taj Mahal. An architectural love letter, this massive marble temple in northern India is one of the most recognizable structures on the planet. Situated on the banks of river Yamuna, the monumental beauty has inspired countless people around the world and is a fine example of fusion of many architectural styles. It is one of the wonders of the modern world. Built in the year 1652, by Emperor Shah Jahan, to immortalize the memory of his beloved wife Mumtaz Mahal, who died tragically in 1631. It took 22 years and 20,000 skilled artisans to complete this poem in white marble. Witness the Taj bathed in Sunlight before returning to your hotel for breakfast.

After breakfast, complete check out formalities and proceed by surface to Delhi. Enroute stopping for a guided sightseeing tour of Agra Fort which lies across the river Yamuna which abode attractive constructions such as Pearl Mosque, Jahangir Mahal, Diwan-i-Khas, Diwan-i- Am and more. It was here that Aurangzeb the 3rd son of Mughal Emperor Shah Jahan kept his father under house arrest until his death.

Later depart for Delhi by surface. A 3.5 hrs drive gets us back to the capital city of India. On arrival you will be transferred back at your place of residence

END OF OUR SERVICES We sincerely hope that you had an “incredible” experience while in India and take this opportunity to wish you a happy & memorable journey back home.
Meals : Breakfast

CMORE "The Company" accepts bookings subject to the following conditions: On confirmation of the programme from the " Company " a deposit equal to 50% (fifty) of the contracted value of the tour price is required to be sent directly to the "Companys" bankers, vide swift transfer, with a confirmation copy of the same to the "Companys " headquarters, at New Delhi. The balance of the contracted value 50% (Fifty) shall be paid not less than 15 days before commencement of tour OR a deposit of 100% (Hundred) is required 30 days before commencement of tour. CANCELLATIONS: Travel dates may be changed up to 30 days prior to travel without penalty. An administration charge of 10% will be charged, if a confirmed booking is changed or transferred up to 30 days before commencement of the tour. After this time all changes will be treated as cancellation and will be subject to the charges mentioned below. Cancellation charges are calculated from the day, written acceptance of confirmation along with deposit is received by the “Company” and expressed herewith as a percentage of the total tour price including surcharge as follows: Cancellation Charges: Days Prior to Arrival – up to 30 Days: 15% 29 to 10: Days: 40% Less than 10 Days: 65% Day Tour starts: 100% (No Refund) All disputes subject to Delhi Courts only.