Buddhism - the Second Religious Schism to Emerge from Hinduism Spread to Far Off Places/lands of the World. The Profounder, Buddha Was Born in What is Now Nepal, Achieved Enlightenment At Gaya (bihar) Delivered His First Sermon At Sarnath (up). Before Taking His Last Breath At Kushinagar (deroia, Up) He Traveled Miles Across the Country. Today Its Influence and Popularity are Proof in the Buddhist Sites Dotting the Countryside. However Our Tours are Not Affiliated with Any Particular Spiritual Path. All are Welcome!group Discounts Available On Minimum 10 Paying Paxairfare (delhi-varanasi-lucknow - Delhi) Breakfast On Day of Arrival, Meals, Medical & Personal Expenses like Beverages, Tips and Gratitude’s, Telecommunication Charges, Wi-fi Charges, Laundry, Insurance of Any Kind, Visa Fees, Gst @5% and What So Ever Not Mentioned Under “cost Includes”1-1031-3 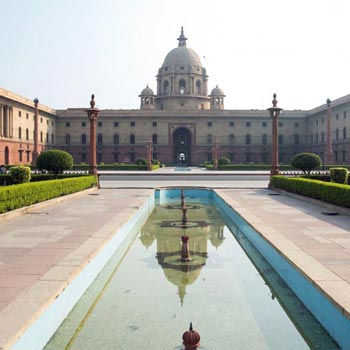 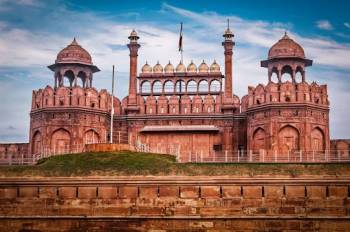 1 More Image
You are Greeted On Arrival At the Delhi Indira Gandhi International Airport and Driven to Your Pre Booked Hotel. (check in 1400 Hrs.)

Delhi is a City of Contrasts. From the Neoclassical Architecture of the Elegant Garden City of New Delhi to the Narrow, Twisting Lanes that Surround Chandni Chowk in the Old City is What Delhi is all About. It is a City Built and Rebuilt Seven Times Over Several Centuries. The Capital City Today Marries the Quaint and Unique Elements of Different Historical Eras with the Pace of the Bustling, Growing Economy. At Every Turn of the Road, the Past and the Present Coexist.

Later in the Afternoon Proceed for Half Day Guided City Tour of New Delhi. The Buildings Designed By Edward Lutyens, Architect of Modern Delhi - are Truly Majestic. Drive Past the Presidential Palace, Parliament House and India Gate Which are all Reminiscent of the British “raj”. We Stop for Photo Shoots Before Driving Onward to Visit An Hindu Temple Next Driving Through Delhi’s Beautiful Tree-lined Avenues and the Diplomatic Enclave Area We Arrive to Visit the 12th Century, 234-foot High Fluted Minaret of Qutab Minar. You Finish Your Tour Visiting Humayun's Tomb, the Second Mughal Emperor to Rule India, Overnight Stay in Hotel.
Day 2: 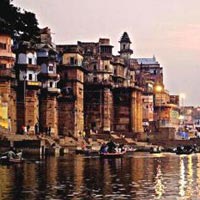 Morning After Breakfast, Transfer to Domestic Airport to Board Your Flight for Varanasi. On Arrival Meeting, Assistance and Transfer to Your Pre Booked Hotel.

En route to the Hotel stop to Visit the Ancient City of Sarnath Where Buddhism First Made Its Appearance Nearly 2500 Years Ago and Where Lord Buddha Gave His First Sermon to His 5 Disciples. Here You Will Visit the Chowkhandi Stupa, the 46 M High Dhamek Stupa and the Dharmarajik Stupa Built By Emperor Ashok Around 258 Bc. Wonder At the 20 M High Ashok Pillar, Which Exists Till Today. Also Visit the Museum Before Continuing Your Journey to Varanasi Hotel. On Arrival Complete Check in Formalities.

Varanasi More Than 2500 Years Old is the Only City in the World that is Still Flourishing in Its Full Form. Earlier Known as Kashi, Which Finds Mention in the Ancient Indian Texts of Upanishads and Puranas, Varanasi is Believed to have Been Established By King Kashya in Around 1200 Bc.

Afternoon is Reserved for a Guided Half-day City Tour of this Ancient Town, Situated On the Banks of River Ganges, in the State of Uttar Pradesh. Visit the Ramgarh Fort, Benares Hindu University Campus and the Temples of Bharat Mata, Kashi Vishwanath (Shiva) and Durga Mata Temples. Wonder Around in the Narrow By Lanes Near the Ghats.

Evening Take a Sunset Boat Ride and Witness, Aarti (puja) Religious Ceremony Performed On the Ghats of the Holy River, Before Returning to Your Hotel for Overnight Stay. 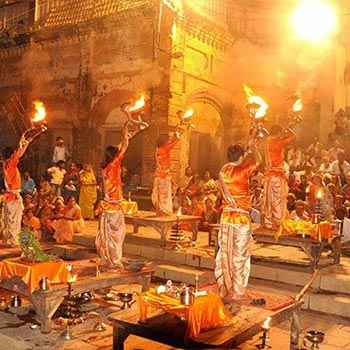 Early Morning, Transfer to the Ghats to Take An Unforgettable Sunrise Boat Ride On the Ganges. See the Different Ghats (bathing Spots) Built Centuries Ago By Various Kings and Noblemen. Cruise By the Burning Ghats, and Watch Sunrise Before Returning to your hotel for Breakfast.

After Breakfast, depart By surface for Bodhgaya, the City of Lord Buddha's Penance and Supreme Enlightenment. The History and Tradition of this Sacred Spot Goes Back to the Earliest Days. Reckoned as the Most Important Buddhist Pilgrimage Center, It is the Place Where Lord Shakyamuni (Gautama Buddha) Entered Into Meditation After Being Moved By the Sufferings of Mankind. On Arrival, Check in to Your Pre Booked Hotel.

Afternoon Enjoy a Guided Tour of this Ancient Riverside Town. Visit the Sri Lankan Monastery and Visit the Mahabodi Temple for the Evening Prayers and the Bodhi Tree Under Which the Lord Achieved His Enlightenment. Return to Hotel for Overnight Stay.
Meals : Breakfast
Day 4: 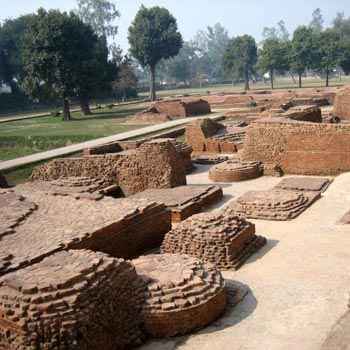 Morning After Breakfast, Depart By Surface for Patna, En Route Visiting Rajgir - a Site of Great Sanctity and Significance for Buddhists. the Gridhakuta Hill, in Rajgir, Was the Seat from Where Buddha Delivered Many of His Sermons. It Was Here that the Teachings of Buddha Were Recorded in Writing for the First Time. Next Visit Nalanda- Which Literally Means the Place that Confers the Lotus. It Was One of the Oldest Universities of the World and It Was a Center of Great Learning Which Reached Its Zenith Between 5th and 12th Century A.D. Both Lord Buddha and Lord Mahavira Visited this Place. also Visit Karanda Tank - Where Buddha Used to Bathe. Arrive Patna and Check in to Your Pre Booked Hotel. After Fresh & Change Visit Patna Museum with Your Guide. Return to Hotel for Overnight Stay.
Meals : Breakfast
Day 5: 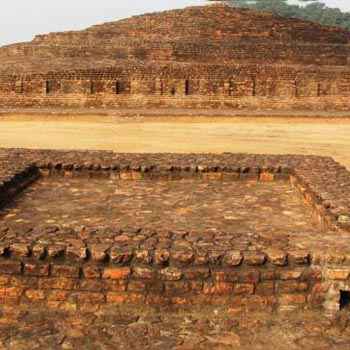 After an early, breakfast proceed for a guided tour of Kushinagar. It was here that the Tathagatha, the reciter of truth, breathed his last with the "last words" behold now, brethren, exhort you, saying, decay is inherent in all component things! Work out your salvation with diligence! Visit Ramabhar Stupa & the Mahaparinirvana Temple, where you get to see the statue of Buddha in a reclining posture.

Continue your journey to Lumbini - birthplace of Gautama Buddha, the founder of Buddhism. Lumbini is situated on the Indian Nepal border and legal formalities are to be completed to enter Lumbini. After crossing the border, transfer to your pre booked Hotel. Overnight stay in the hotel. 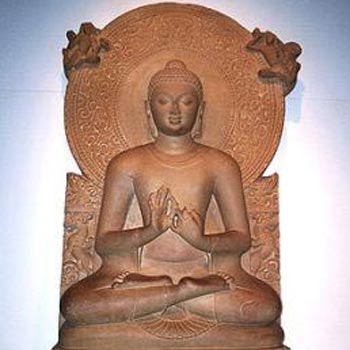 Erected By Magadha Emperor Ashok, to Commemorate the Birth Place of Buddha in 251 Bc - Today Only the Lower Shaft of the Pillar Stands, the Upper Past Having Been Split Into Two. Other Attractions are the Sacred Garden (Lumbini Grove) the Maya Devi Temple with a Bass Relief of Maya Devi - Buddha's Mother and a Sacred Stone Marked with a "foot Imprint" of Ashok and Puskarni, the Sacred Pond, Wherein, Maya Devi is Said to have Had Taken a Bath Just Before Giving Birth to Buddha - the Enlightened One. Return to Hotel for Overnight Stay.
Meals : Breakfast
Day 7: 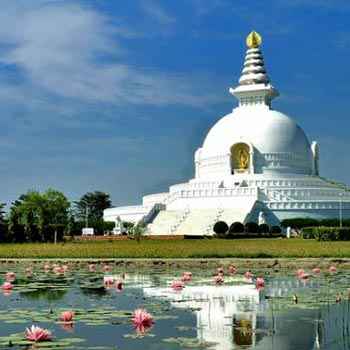 Kapilvastu - the Capital City of the Shakya Clan, and One of the Earliest Republics, It Was in Kapilvastu Opulent Environs, that the Holy Soul of Prince Siddhartha (Gautama Buddha) Spent His Childhood. Here He Saw Sorrow and Pain, Disease and Death. The Place Holds Significant Value for Buddhist Pilgrims and Has Several Stupas. The Archaeological Excavations have Revealed Stone Caskets Containing Relics Believed to Be that of Buddha's. Sravasti is Where Lord Buddha Spent 24 "Baisakhi" of His Life and Delivered His Sermons. On Arrival, Check Into Your Pre Booked Hotel.

Afternoon a Guided Visit to the Extensive Ruins of this Ancient City. Sravasti Has Two Villages, Sahet Situated On Rapti River and the Ancient Fortified City of Mahet, which is Spread Over An Area of 400 Acres Having a Number of Ruins. This is Where the Lord Performed His Miracle Sitting On a Petal Led Lotus Multiplying 1000 Times. Also Visit the Angulimar's Cave and the Village of Sujata, Which is Where a Woman with the Same Name Gave Lord Buddha His First Meal of Milk and Rice Pudding After He Came Out of the Austerities He Was Performing and Broke His Fast.

the Entrance to the Mud Fortification of Mahet is Constructed in a Beautiful Crescent Shape Though An Ancient Structure, Its Five Gates and Walls are Still Visible. Pakki Kuti, Kuchhi Kuti and Many other Stupas Tell the Story of the Great Monasteries that Once Stood Here. Visit also the Remnants of Jetavana, a Splendid Monastery with Inscriptions Dating Back to the 12th Century, is Thought to Be One of the Favorite Sites of the Buddha.

Sravasti Was also Under the Influence of Lord Mahavira the Last Jain Tirthankara, and the Splendid Shwetambara Temple Here Attracts Thousands of Jain Pilgrims. The Sobhnath Temple is Believed to the Birthplace of the Jain Tirthankara Ambhavnath. Return to Your Hotel for Overnight Stay.
Meals : Breakfast
Day 8: 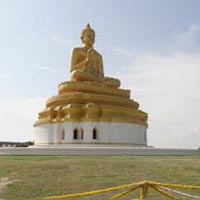 After Breakfast Depart By Surface for Lucknow. On Arrival, Check Into Pre Booked Hotel. Afternoon is Reserved for a Guided City Tour of the Royal City of the Nawabs. Lucknow is Caught in a Time Warp. It Exists in An In-between Land of the Past and the Present Looking Back Constantly to the Memories of a Colonial- Nawabi Past. Despite the Indo-Persian Legacy, Lucknow Has a Composite "Indian Culture". the Welding of Various Cultural Strains Nurtured By Centuries of Mughal and Later Delhi Sultanate Rule, to the Folk Traditions of the Indo- Gangetic Plains Has Produced a Complex, Yet Rich Synthesis. The Urdu Language Acquired Its Baffling Phonetic Nuances and Suave Perfection Here. It Was At Nawab Wajed Ali Shah's Court that the Most Advanced of all Classical Indian Dance Forms, the Kathak, Took Shape. The Popular Parsi Theater Originated from the Urdu Theater of this City. The Tabla and the Sitar Were First Heard On the Streets of Lucknow. Return to Your Hotel for Overnight Stay.
Meals : Breakfast
Day 9: 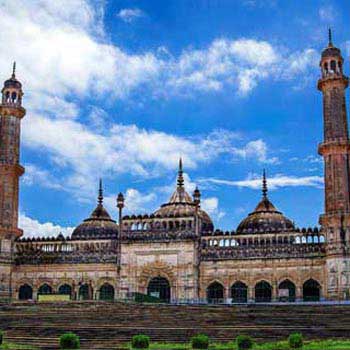 Morning After Breakfast, in Time Transfer to the Airport to Connect Flight to Delhi and On Arrival, Meeting, Assistance and Transfer to Your Pre Booked Hotel.

Afternoon is Reserved for Half Day Guided City Tour of Old Delhi. Visit the Magnificent Red Fort, Built At the Zenith of the Mughal Empire in India. The Centuries- Old International Market- Place that Sprawls At Its Feet is Still One of Delhi’s Most Important Commercial Hubs: Chandni Chowk, or “moonlight Square”. Ride On Cycle-rickshaws (optional) Through the Bustling Silver Market and the Wholesale Spice Market. The Sounds, Smells and Colors of the Bazaar, and the Throngs of People Who Animate It Make this An Unforgettable Spectacle. Visit Jumma Masjid, the Largest Mosque in Asia and Rajghat-Mahatma Gandhi’s memorial, Before Returning to Your Hotel for Overnight Stay
Meals : Breakfast
Day 10:

End of Our Services - We Sincerely Hope that You Had An “incredible” Experience While in India and Take this Opportunity to Wish You a Happy & Memorable Journey Back Home.
Meals : Breakfast