Kashmir -Switzerland of the East Tour

Embraced in the lap of the mighty Himalayas. Kashmir is a paradise embellished with various natural riches. This wonderful mountain valley has cosseted various popular holiday destinations within its periphery like – Gulmarg, Sonmarg, Pahalgam & Srinagar. From awe-inspiring landscapes, to the bubbling rivers; from the majestic mountains to the magnificent meadows of flowers; every nook and corner of Kashmir is studded with the best gem of nature’s treasure trove. Moreover, it has various ancient shrine and colonial edifices that mesmerize the travelers with an old-world charm. A tour to Kashmir simply means a tour to a kingdom of heritage and natural elegance.Air or Train Tickets to Srinagar & Back
Breakfast on day of arrival
Meals (lunch) at Sonmarg
Items of personal nature viz, tips, laundry, room service, Wi Fi services, telephone, alcoholic or non-alcoholic beverages, boat rides, pony / horse rides, safaris, rafting, skiing, skating, cable car / ropeway rides (unless mentioned), helicopter rides, additional sightseeing tours excursions not included & mentioned in the itinerary, still or video camera fees etc.
Any kind of insurance or Visa charges
Snow Jeep from Tangmarg to Gulmarg & Return
GST @ 5% on total Invoice amount.

Extra – Not included in Package cost
AIRFARE: USD 270.00 per person

Please Note Bien: Fares quoted are approximate. Please note fares tend to change every hour or so and therefore there is no guarantee that the fares will be the same as stated in our proposed mail. Moreover there is no Guarantee on flight timings as they are very much depended on weather conditions. You have an allowance of 15 Kg Check –in Baggage & 07 Kilos hand baggage.
-You have the option of booking your air tickets directly with the airline.1-1031-3 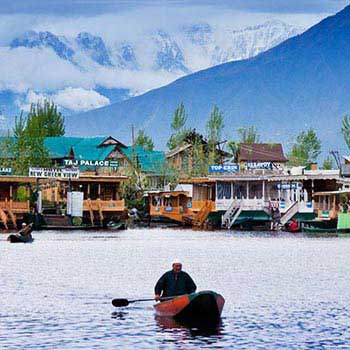 Morning reach Delhi airport on your own to board flight for Srinagar.On arrival in the Lake city, you are greeted and escorted by our company representative to your deluxe houseboat anchored on Dal Lake. Check in and proceed for Lunch. After Lunch day free for own activities. Evening enjoy a romantic “Shikara” (Boat) Ride on Dal Lake. Dinner & Overnight stay in Houseboat
Meals : Lunch & Dinner
Day 2: 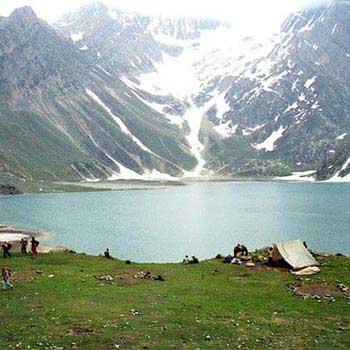 Morning after breakfast embarks by car for a full day excursion to the picturesque Sonmarg which is also called the “meadow of gold”. The fast flowing Sindh River makes it popular for trout & mahseer fishing in summers. You can opt for a pony ride to one of the many glaciers for fun & frolic in the snow (Payment to be made directly to the pony owner & is not included in the package cost) Late evening return to Srinagar to your Houseboat in time for Dinner & Overnight stay.

Please note Lunch is not included in today’s meal plan and the option is open for you to have meals of your own choice while in Sonmarg.
Meals : Breakfast & Dinner
Day 3: 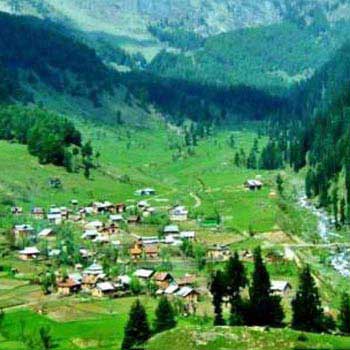 Morning after breakfast proceed by car to the lovely tourist spot of Pahalgam. Enroute you will drive past Saffron Fields, Ruined city of Avantipur and the Anantnag sulpher springs. Later on arrival, check into your chosen hotel. Pahalgam is also known as the “Valley of the Shepherds” and is Located at 2440 meters and is famous for its alpine treks, nature walk and is also the central point of Amarnath Yatra. Afternoon is at leisure for own activities. Overnight stay
Meals : Breakfast
Day 4:

Morning after breakfast depart by car for the scenic destination of Gulmarg. It is primarily famous for its Ski Slopes and a natural 18 holes golf course, which also happens to be the highest golf course in the world. On arrival check into your chosen resort. 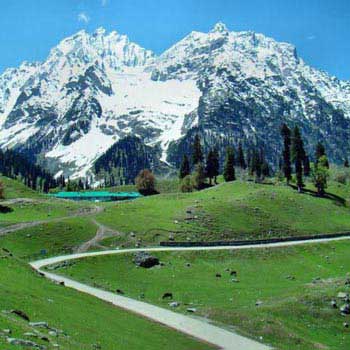 by car for Srinagar. On arrival, transfer to your deluxe houseboat for Lunch. Afternoon proceed for half a day guided city sightseeing tour of Srinagar City.

Srinagar is the summer capital of the Indian administered state of Jammu and Kashmir and lies on the banks of the Jhelum River, a tributary of the Indus. The city is famous for its gardens, lakes and houseboats & is also known for traditional Kashmiri handicrafts and dry fruits.

Srinagar has a long history, dating back at least to the 3rd century BC, and has been known by different names. The city was founded by the King Pravarasena II over 2,000 years ago. Srinagar is one of several places that have been called the "Venice of the East" or the "Kashmiri Venice".

Begin your guided tour visiting the famous Mughal gardens of Nishat Bagh (Garden of pleasure) having an impressive plantation of Chinar Trees on its highest terrace. Next visit Shalimar Bagh (Abode of Love) situated on the banks of Dal Lake. Both the gardens are built on a symmetrical plan of central waterways with fountains dividing a series of gardened terraces, followed by a visit to the famous Shankaracharya Temple, also known as the Jyoteshwar temple dedicated to Lord Shiva. The temple is located on the summit at a height of 1,000 feet above the plains, and overlooks the city of Srinagar. The temple dates back to 200 BC, although the present structure probably dates back to the 9th century AD. The temple was visited by the Adi Shankaracharya and has ever since been associated with him.

Next visit takes us to Chashma Shahi (the royal fountains); Pari Mahal (the palace of the fairies) and the Naseem Bagh. Last if not the least, if political situation allows we will try & visit the Hazratbal Shrine. The silvery white Hazratbal Mosque is revered for housing a relic, the Prophet’s hair. Situated near the Dal Lake, the only domed mosque in Srinagar is a place of serenity. Women are allowed only till the first part of the mosque. The Hazratbal Mosque lends a historic and divine appeal to Srinagar. As you walk down the corridors of this famous religious sanctum, you marvel at the intricate Persian and Iranian architectural influences. Return to your houseboat for Dinner & Overnight stay.
Meals : Breakfast, Lunch & Dinner
Day 6:

Morning after breakfast, on time transfer to Srinagar Airport to connect your flight to Delhi. Later on arrival own arrangements

END OF OUR SERVICES: We sincerely hope that you had an incredible” experience while in India and take this opportunity to wish you a happy & memorable journey back home.
Meals : Breakfast

Terms & Conditions – Applicable for all packages CMORE "The Company" accepts bookings subject following conditions: On confirmation of the programme from the " Company " a deposit equal to 50% (fifty) of the contracted value of the tour price is required to be sent directly to the "Companys" bankers, vide swift transfer/ credit card with a confirmation copy of the same to the "Companys " headquarters, at New Delhi. The balance of the contracted value 50% (Fifty) shall be paid not less than 35 days before commencement of tour OR a deposit of 100% (Hundred) is required 35 days before commencement of tour. Please note for Group Travel, Luxury Resorts or Luxury Train holidays & during Peak season (October to March) 100% (Hundred) is required minimum 120 days prior to travel date. (Strict Cancellation rules apply and are different than the one given below) Cancellations : Travel dates may be changed up to 35 days prior to travel without penalty. An administration charge of 10% will be charged, if a confirmed booking is changed or transferred up to 35 days before commencement of the tour. After this time all changes will be treated as cancellation and will be subject to the charges mentioned below. Cancellation charges are calculated from the day, written acceptance of confirmation along with deposit is received by the “Company” and expressed herewith as a percentage of the total tour price including surcharge as follows: Cancellation Charges: Days Prior to Arrival – up to 35 Days: 10% 34 to 10: Days: 40% Less than 10 Days: 75% 07 days prior to Tour starts: 100% (No Refund) All disputes subject to Delhi Courts only. Validity : 01st October 2018 to 31st March 2019 However Rates are not valid between 20th December & 06th January 2019.